People begin forgetting you five minutes after you die.

It’s a harsh truth…but it is the truth.  In one sense, it’s normal.  When it’s our time to die, those who love us can’t spend the rest of their life in the grief accompanying those first few days, weeks, and months.  They would, literally, lose their minds if they did.

I’ve told Patty (my wonderful wife and editor—and no, she didn’t write this sentence!): if I die young, I want her to remarry as soon as she’s ready.  I’ve told her this because I want her to be happy and I KNOW she will need to move on and it will help her to know I feel this way now while I’m living.  She couldn’t go on wearing all black and crying for the rest of her life. 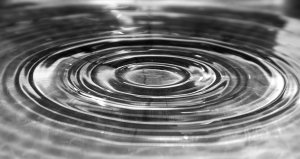 On the other hand, there’s the cold reality of people forgetting you five minutes after you die.  And that reality is this: life moves on.  The sun rises and sets.  Seasons come and seasons go.  People are born and people die.  And after we die, people begin the process of forgetting us.  We’re just a small stone dropping into a very, very, very large ocean.  It’s just the way it is.

Then I turned my thoughts to consider wisdom, and also madness and folly. What more can the king’s successor do than what has already been done? I saw that wisdom is better than folly, just as light is better than darkness. The wise have eyes in their heads, while the fool walks in the darkness; but I came to realize that the same fate overtakes them both. Then I said to myself, “The fate of the fool will overtake me also. What then do I gain by being wise?” I said to myself, “This too is meaningless.” For the wise, like the fool, will not be long remembered; the days have already come when both have been forgotten. Like the fool, the wise too must die!

After considering the foolishness of seeking unending, unbridled pleasure and wealth, King Solomon turns his wisdom towards wisdom itself.  Closely associated with this is the consideration of the absence of wisdom: madness and folly.

For all the problems Solomon points out with living a godless life, he doesn’t dismiss wisdom quickly.  On the contrary, he states it’s better than foolishness just like turning a light on keeps you from stumbling around in the dark.  Yet, for all wisdom brings to a person, the end result is the same: death.  Underneath all of this is the issue of legacy.

Regardless of our living life wisely, it is maddening: death comes for us all.  The wise and foolish are forgotten after their days come to an end.  As Duane A. Garrett remarks, “Future generations will no more remember the scholar than they will the beggar on the street”.[1]

How does wisdom benefit those pursuing it then?

If we’re brutally honest, we’d have to admit, “not much.”  Verse 15 expresses this frustration: we still die in the end.  How depressing.

And this is Solomon’s point—really it’s his point throughout Ecclesiastes!  Perfectly presented here: the argument of this book of the Bible is to pose the issue of life without God.  Can wisdom be pursued apart from God?  Of course it can!  Are there wise people who are not Christians?  Yes!

But if their wisdom is the only thing they have going for their philosophy, they fall into the category of Solomon’s remarks in today’s passage.  Without God, this is the way of the world.  Wisdom, by itself, isn’t enough to lift us out of the mirth of human existence.

It is only by seeking God’s wisdom we are able to overcome the depression of humanity and see something more on the horizon.

So what’s to become of our legacy?

That depends on the type of wisdom you pursue.

Are your pursuits of wisdom based in God or the world?  Is your legacy something passed on—perhaps subconsciously—to those around you?  Are they consistent with His wisdom or are they merely platitudes and practices of those trying to carve significance from this life only?

The answer to the questions of our legacy deals with the type of wisdom we seek.  Godly wisdom leaves a Godly legacy.  People may begin forgetting you five minutes after you are promoted to Heaven, but your legacy of faithfulness and fruitfulness to our Lord’s kingdom will live on in those around you.

What if TODAY you started a process of seeking God’s wisdom?  What if you read through a chapter of the Proverbs every day for the next thirty-one days?  What if you learned how to grow in wisdom AND in grace?

What if today you started thinking about the legacy that matters?