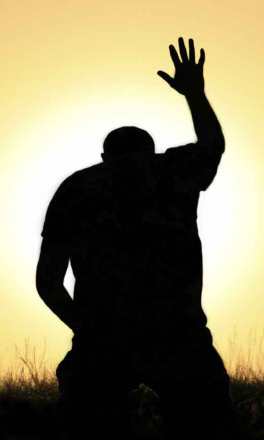 “All that is necessary for evil to triumph is for good men to do nothing.”

Attributed to Edmund Burke in the 18th century, this saying has been recorded in different ways but retains its original intent: stand up and keep evil from winning.

But what do you do when it seems God is standing by and doing nothing?  What do we do about those times He is silent?  How do we reconcile this?

The psalmist, Asaph, writes in Psalm 83:1, “O God, do not remain silent; do not turn a deaf ear, do not stand aloof, O God.”  Translation: do something, God!!!!  This is a tough spot to be in.  As a community, the Israelites called out to God and only heard silence in return.  Have you ever felt the lonely echo of your prayers?

The call throughout most of this Psalm is for the Lord to rise up and vindicate His people.  It even gets to the point in verse three where we read, “With cunning they conspire against your people; they plot against those you cherish.”  The nation of Israel was God’s special possession.  They were His people and He created them through His promises to Abram and had cared for them up to this point.

Now He was silent.

The call to the Lord wasn’t masquerading behind what we might refer to as a “Sunday school answer.”  No, they were pleading for the Lord to show up and show out.  “May they ever be ashamed and dismayed,” verse seventeen pleads, “may they perish in disgrace.”

But there was a different motivation revealed here than something as spiteful as vengeance and it’s found in verse eighteen: “Let them know that you, whose name is the Lord—that you alone are the Most High over all the earth.”

The human author, under the Holy Spirit’s inspiration, correctly knew that it was the Lord’s reputation on the line insomuch as it was the lives of His people.  Even in disappointment and anger, the Lord’s people seek the glory of the One Who made them.  Not only would they be spared when the Lord proved His power and might to the other nations, those same nations would recognize Him as “the Most High over all the earth.”

There are times, dear friend in Christ, when the Lord seems like He’s wearing a set of earmuffs and you feel like every prayer is bouncing back from the ceiling to you.  There are times when the reverberation of your breaking heart painfully echoes through the emptiness of God’s silence.

It’s in those moments we shift our prayers from “vindicate me” to “glorify yourself.”  The reality is this: God has promised to finish what He started in you.  His silence has a greater purpose than you see now.  That reality, however, doesn’t make Him bad; it makes you ignorant.

Like the Apostle Paul we are “confident of this: that He who began a good work in you will carry it on to completion until the day of Christ Jesus” (Philippians 1:6).

Ultimately, evil will never triumph over you, child of God.  The only good Man that ever lived, Jesus, has done something you could have never done for yourself: secured your entrance to God the Father’s presence in Heaven.