In spite of the “most wonderful time of year,” the news continues to be filled with conflict, tension, bickering, suffering, and pain.

“If it bleeds it leads” doesn’t stop just because our Christmas lights are hung and our carols are being sung.

Didn’t the angel talk about “peace on earth” (cf. Luke 2:14)?  Maybe the early followers of Jesus asked the same thing when they found themselves in a room with Jesus on what would come to be called “The Last Supper.”  After telling He’s going away (and that it’s actually BETTER for them if He goes away), Jesus makes a shocking statement to the eleven remaining Apostles in John 14:27 (New Living Translation)

“I am leaving you with a gift—peace of mind and heart. And the peace I give is a gift the world cannot give. So don’t be troubled or afraid.

The world of Jesus and the Apostles was far from peaceful.  Perhaps there wasn’t a lot of open physical conflicts where Jesus immediately was, but the tension between the Jewish people and the Romans was palpable.  More than one of the pillars of the church must have thought Jesus had been drinking too much Passover wine.  There wasn’t peace in their world and the tension Jesus created between the political powers of the Jewish people and Himself didn’t help matters.

Within hours, Jesus would be arrested, tried by the Sanhedrin, tried before Pontius Pilate on trumped up charges and convicted to death.

Surely he took up our pain
and bore our suffering,
yet we considered him punished by God,
stricken by him, and afflicted.
But he was pierced for our transgressions,
he was crushed for our iniquities;
the punishment that brought us peace was on him,
and by his wounds we are healed.
We all, like sheep, have gone astray,
each of us has turned to our own way;
and the Lord has laid on him
the iniquity of us all.
Isaiah 53:4-6 (NIV)

So what in the world was Jesus talking about when He offered those apostles—and us—“peace”?  In case you haven’t been paying attention in Jesus’ story or ours: the world is NOT a peaceful place.  So where is this peace? 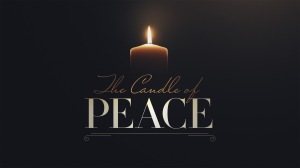 The peace Jesus offers, and the peace we celebrate this second week of advent, is the New Testament idea of a Hebrew expression: shalom.  It means more than simply “peace.”  It refers to rest.  But not just rest from labor.

The giving of the Lord’s peace to His disciples (then and now) is His gift of rest because of:

On this second week of Advent, may you find the shalom of peace in Jesus, the Baby of Bethlehem and King of Kings.